Moments for most significant monuments

If you ever had the pleasure to visit Sarajevo, you must have been amazed by this city. With mountains on one side and its rich history on the other, this city represents a remarkable gem. Recognizable by its unique old town - Bascarsija, Sarajevo attracts numerous tourists all through the year, There is so much to see and taste in Sarajevo, yet the city becomes memorable for its beautiful bridges too, bridges that have witnessed different periods of the history. So, let’s start our walk through Sarajevo and visit them.

At the very beginning of your tour, when you start walking through Sarajevo, you have to visit Skenderija Steel Bridge. It is said to be designed by the famous architect Gustave Eiffel. Although there is no official document that confirms this claim, the local people refer to this bridge as the Eiffel’s Bridge. Historically speaking, this pedestrian bridge was built as a wooden bridge in 15th century by the Ottoman governor, Skender-pasha. Over the years and centuries, the water level of the river used to rise, often washing away the wooden construction of the bridge. It was then rebuilt by the Austro-Hungarian administration, as a steel bridge in 1893. It captures the city memories since. Nowadays, it also serves as a love padlock bridge.

When you continue the tour through Sarajevo and go further, you will spot Drvenija Bridge, across the river Miljacka. Due to the frequent flooding of this restless river, the bridge was built from wood during the Austro-Hungarian period in 1898. It had to be rebuilt many times. Today the pedestrians can enjoy walking across this bridge whose construction has been replaced by concrete. What makes this bridge special is hidden in its other name - Gymnasium Bridge, because gymnasium stands for the term for high school in Bosnia and Herzegovina and there are several schools, academies and faculties, located close to this monument, so its second name came naturally.

The one that stands as the oldest among the preserved bridges in the city is Latin Bridge. This symbol of Sarajevo dates back to 1541 and, according to historical sources, it was built by the eminent citizen of Sarajevo - Ali Ajni-Beg. The name of the bridge comes from the fact that, at the time, the left bank of the river was inhabited by Sarajevo’s Catholic population. By the end of the 18th century it was considerably damaged during the terrible flood and it demanded reconstruction. Important world history was written at this marvellous monument, too. At the exact turning from the right bank into the street, young man named Gavrilo Princip shot and killed Franz Ferdinand, the Austrian archduke on June 28 1914. His assassination was the spark that ignited the World War I. After the Great War, from 1918 until 1992, this bridge was known as Princip's Bridge.

In the end of our tour, we arrive to Festina Lente Bridge, the most recent one. This 38 meters long pedestrian bridge was officially opened in 2012 and it very much differs from the other bridges of Sarajevo. Its name suggests that you should hurry up, but in a slow manner. And when you go across this bridge, you will see an unusual loop in the middle, that teases you to slow down and enjoy the view from the small bench placed within. What is also interesting about this bridge is the fact that it was designed by three students of the Academy of Fine Arts in Sarajevo who won the competition for the design of this bridge. The modern construction connects Radićeva Street to the spectacular Academy of Fine Arts Building, both being major landmarks of the city.

So, welcome to Sarajevo, the city where each bridge tells its unique story and you simply have to indulge your senses in hearing, seeing and feeling each of them! 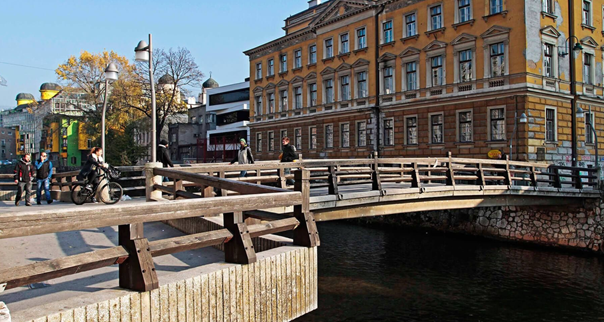 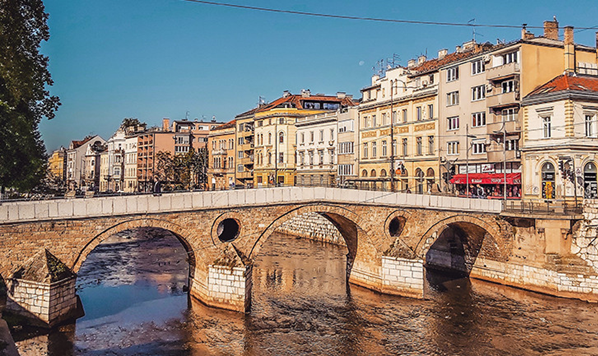