Ia, from simplicity to a cultural brand

Ia, the traditional Romanian blouse, from history to catwalk

Ia, the basic piece of women's folk costume, is part of the Romanian traditional costume with its roots dating back to Cucuteni Culture, the oldest European civilization, present during the period 5,200 – 3,200 B.C.

Ia is more than just a piece of clothing; it is a national symbol, a story and a history book.

Ia has a simple cut, and is usually white and made of hemp, flax cotton or silk, over which geometrical or floral motifs are embroidered in colored threads. Motifs differ from one region to another. The used ornaments, colors and materials represented a social mark, age, marital status, religious affiliation and place of origin within the country. Unmarried girls wear bright and rich colors to highlight their purity, youth, and beauty. Married women wear them sewn in neutral, earthy colors, which are associated with family fulfillment and steadfastness. Elderly women have also adopted neutral colors as a symbol of mourning after many were left widowed during the wars. The art of making these traditional Romanian blouses is passed from one generation to another. The women who craft these blouses have kept the tradition alive through time, passing their secrets from mother to daughter.

Ia is worn by women from the country or the city, but also by representatives of important families in our history.

Queen Marie of Romania, born into the British Royal family, was only one of the royal figures who loved everything connected to Romanian traditions and the Romanian ethnic costume was turned into a personal fashion style. In many photographs and films she is depicted wearing both the traditional costume and also outfits inspired by it, which were considered more appropriate for royal etiquette. Following in the footsteps of Queen Marie, several members of the aristocracy of the time embraced the ethnic costume.

Without intending to be an ambassador for the Romanian ia, the French painter Henri Matisse made ia famous worldwide by using the motif of the traditional blouse in many of his sketches and paintings. The most famous painting remains “La blouse Roumaine” (1940), held at the Musée National d’Art Moderne in Paris.

Due to its versatility, it is no wonder that fashion designers around the world have been inspired by this item of clothing and have used Romanian ethnic influences in their collections.

In 1981, Yves Saint-Laurent first introduced the Romanian traditional shirt to the world in his Fall collection. Later, in 1999, in a year where a total eclipse of the sun was enjoyed with maximum visibility in Romania, he dedicated his whole Fall-winter collection titled “La blouse Roumaine” to the traditional shirt, a tribute to the Romanian heritage in the 20th century. He said “A Romanian blouse does not belong to any period. All the peasant clothes are passed down from century to century without ever going out of fashion.”

Ia become a cultural brand and, in turn, there is also a day dedicated to the celebration of the shirt, namely the 24 June.

The event is marked in over 50 countries on six continents. The Day of the Romanian Blouse has become a part of the annual program of museums and cultural institutions in the country and abroad, being celebrated both by the Romanian embassies and by the diplomatic missions in Romania. 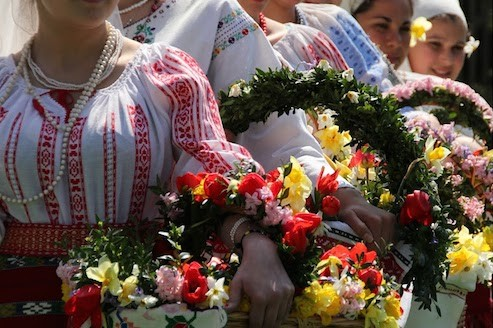